What Is Religion?
Answers to Questions and Objections
"Religion is a means toward ultimate transformation."
Where did this definition come from?  Out of the blue?  From some kind of a priori intuition?  Or is there some kind of factual basis behind it?
Good question.  Actually, it's not a definition in the ordinary sense.  It's more of a hypothesis or orienting generalization that provides a guide for a philosophical investigation of the kinds of phenomena people point to when they talk about religion.  It arose from the work of a group of American scholars who surveyed a vast literature from many cultures around the world, past and present, in hopes of finding a common element that would not only be a key to understanding ancient and modern traditions, but also any new forms of religious life that might show up in the future.  So what commonalities did those scholars discover?
Most importantly, they discovered that the traditional teachings are all responses to what Paul Tillich called ultimate concerns.
What counts as 'ultimate' will vary from person to person, won't it?
Yes, and also from culture to culture.   However, this does not imply that there are no universal ultimates among humans.  For example, all humans have an instinct to survive which gives rise to the fear of death, which in turn may be the single most powerful motivator behind the rise of all the world's religious traditions.
Your definition is extremely abstract.  Doesn't it leave the door open for anything to qualify as an ultimate concern if some person says it is?  Aren't ideas about ultimates just subjective? Yes and no,  As students of comparative religion, we want to listen to anyone who has something to say about their ultimate concerns.  However, that doesn't mean we give equal weight to every personal testimonial.  Some might say their religion is bodybuilding or being an active fan of the Seattle Seahawks football team, and they are otherwise not interested in whatever else people call religion.  Fine, but those interests are too narrow, too idiosyncratic for our purposes.  They lack too many of the seven dimensions of religion in Ninian Smart's list.
One sensible way of proceeding would be to examine the five great traditions recognized by everyone as major religions and find out what their mainstream teachings are regarding ultimate concerns and means of transformation.  This is what the UTT scholars did, resulting in their 4 categories of "Traditional Ways of Being Religious." 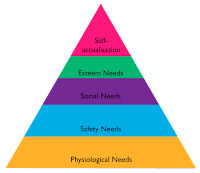 Another way would be to use a modern psychological theory of human needs, for example, Herbert Maslow's famous hierarchy in which needs are shown to arise in a growth hierarchy of lower to higher.  As lower needs are met, individuals focus on higher needs, any one of which may become an ultimate concern, depending on particular life circumstances.  There is plenty of evidence to suggest that each of these has been the ultimate concern of various societies throughout human history and the basis for the construction of their religious systems.  Hunting and gathering tribes, for example, faced daily with threats to their physical survival (bottom two levels of Maslow's pyramid), devised rain dances, sacrifices, and other rituals aimed at persuading spirits or gods to bless their crops and hunts or battles with rival tribes.  In advanced societies today, where basic needs for food, clothing, shelter, and physical safety are taken for granted by most citizens, the higher level needs tend to become the focus of religious commitment.

A hierarchy of ultimate concerns is also implicit in James Fowler's spectrum, "Stages of Religious Development," in my earlier post "What Is Religion, Part 1," Figure 4.