What Is Religion?
An Integral Approach, Part 2
Religion as a Universal Developmental Process
Most people are aware that humans develop through various stages from infancy to early childhood to adolescence, to adulthood.  We commonly refer to this process as “growing up,” which suggests a hierarchy of stages or levels from lower to higher, through which individuals normally become more physically mature, more knowledgeable, more competent, more sociable, more responsible, and so on, as they move over time from lower to higher stages of development.  The chart below illustrates a simple 4-stage process of growth in humans:

(Different schemes with more or fewer stages are possible.)
Developmental psychologists and philosophers have discovered the pattern that governs the transition from one stage to the next.  They call it “transcend- and-include,” which means that in a person’s transformation from a lower stage to a higher, certain characteristics that are no longer functional fall away to be replaced (transcended) by more functional ones. However, the earlier stage is not entirely extinguished or sloughed off - fundamental elements of each stage are incorporated or included in the next higher stage, while new characteristics appear that replace or transcend those elements.  For example, language ability appears early in a child’s life in the form of baby talk.  As the child becomes socialized, she drops the infantile language that is no longer adequate and learns more grammatical ways of speaking.  But the basic capacity for language that she acquired in early childhood is retained and carried forward all the way to adulthood with the potential for the individual at higher stages to learn and employ deeper features of language, such as grammar, rhetoric, and linguistics, which cannot be mastered by children.  Thus, the lower stages of language development are transcended but also partially included in the progression to higher stages.
The same pattern is discernible in religious development.  For example, in the transition from magical to mythic consciousness (Figure 1), a child no longer believes she causes the clouds to follow her on her walks or make the world disappear by hiding her head under a pillow.  She has learned to differentiate herself from nature and from other people.  No longer able to believe in her own omnipotent powers, she is open accepting the story of divine intervention in the world taught by her mythic culture, e.g. orthodox Judaism or Christianity.  Now she has learned that God controls things, not her puny self as previously imagined.  So the magic has receded from the child’s worldview,* but her self-consciousness (growing now) and the need for a Governing Power in her life is retained in the new mythic perspective of her faith community.

Returning to the bigger picture of religious development, let us look more closely at  the religious or spiritual intelligence line.  The premise of research into this phenomenon shares the view of UTT (Ultimate Transformation Theory, described in Part 1 of this essay) that from the earliest appearance of self-consciousness, humans have ultimate concerns about their survival, health, safety, social belonging, self-esteem, and the inevitability of death.  However, it seems clear that an individual’s ultimate concerns change during the process of normal growing up, which means their religious or spiritual development will proceed from infancy to adulthood in stages or levels of increasing depth and sophistication.  A three-year-old child’s ultimate concerns and means of resolving them are different from those of a Muslim high school student and those again are different from those of a 30-year-old practitioner of Zen Buddhism.  The UT model does not include an account of those differences, probably because the importance of development in religiosity was not well understood in the 1970’s and 80’s.  The task of exploring that issue has been taken up in recent decades by scholars specializing in cross-cultural investigation of religious/spiritual development.
_____________

*Receded but not entirely vanished from the believer’s life.  Magical thinking remains as an unconscious perspective that is still available to the imagination.   That is why a rational adult can still enjoy movies like The Wizard of Oz and The Lord of the Rings.

Despite differences among researchers, there is widespread agreement on six to eight major stages or levels of religious development in individuals and culture from the earliest appearance of self-consciousness to the highest transpersonal levels of enlightenment.  Figure 1 below displays one such model, adapted from the work of James Fowler who investigated ‘Stages of Faith’ (religion, spirituality) as a distinct line of development in humans.  Fowler’s stages correlate closely with the developmental models of other researchers such as Jean Gebser, Clare Graves, and others, all of which have been correlated by Ken Wilber and mapped in a comprehensive system called Integral Theory.  Figure 2  shows how Fowler’s stages correlate with the color spectrum used by Integral Theory to represent the levels/stages of any developmental model.
Obviously Fowler’s vertical classification of religions differs from the horizontal one used by the UT theorists.  Are the two systems compatible?  Yes.  First of all, the UT definition of ‘religion’ as a means toward an ultimate transformation works for both approaches (or any other, as I have argued).  Secondly, as you can see in      Figure 2, the eight ‘Ways of Being Religious’ in UT theory can be mapped alongside Fowler’s integral spectrum, revealing possible developmental relationships among UTT's "Non-traditional Ways of Being Religious."  My arrangement - vertical and hierarchical from lower to higher - is open to challenge, of course, but some sort of vertical representation is required if the UT scheme is to meet the challenge of 21st century developmentalism.  Postmodernists tend to hate hierarchies, but it is difficult to see how the massive evidence for development theories can be ignored.
Can the same stages of development be identified in the major traditional religions?  The evidence that they can is strong, first, because the spiritual stages in Fowler's spectrum are simply the distinct line versions of the basic stages of consciousness that are common to all humans (Figure 1).  Every human is born at archaic, grows into magic, then mythic, and so forth.  In his book Evolution’s Ally, Dustin Diperna marshals evidence to show that all the major traditions contain at least 5 levels of religious development.  For example, there are magic versions of Christianity, mythic versions, rational versions, and so on. The same holds true for Hinduism, Buddhism, Islam, etc.  Figure 3  displays Diperna’s integral spectrum for Christianity along with prominent contemporary exemplars. 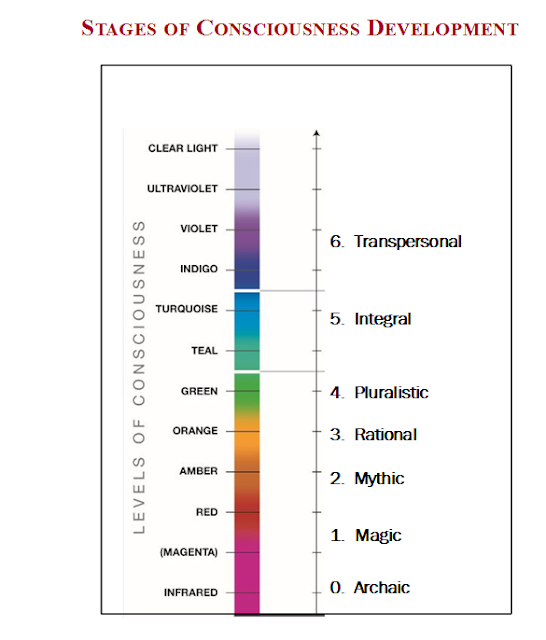 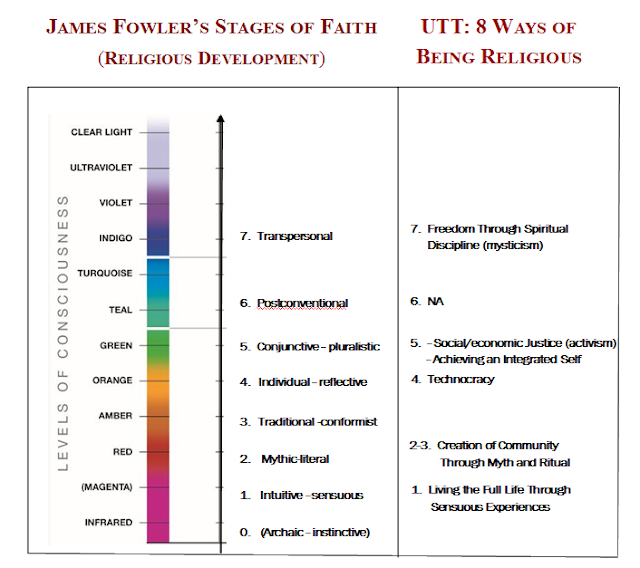 Spectrum of Development
in Christianity 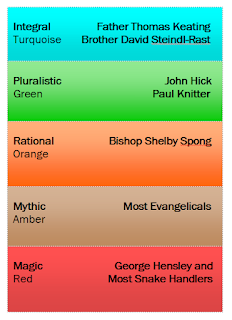 Conclusion
The topic of this essay is of more than academic interest.  Because religion is about people’s ultimate concerns, it has, at least in modern times, occupied considerable space in public discourse.  As indicated earlier, people all over the world line up on one side or another to do battle in what are now called “culture wars.”  Like real wars, wars of words among religious antagonists are destructive, but unlike real wars they are endless.  Unless, that is, some way can be found to honor all sides in some kind of a peace treaty.  Recent efforts to achieve this - the Christian ecumenical movement and the Dalai Lama’s religious “secularism,” for example - have not been notably successful.  Nor have the well-intentioned postmodern approaches that flatten the religious landscape, ignoring crucial differences among faith systems in favour of a buffet of equal “options.”
Such efforts will continue to be unsuccessful if ‘religion’ remains poorly defined from the outset.  In his book A Sociable God, Ken Wilber carefully distinguishes nine different  meanings in common use today.  He rightly asserts that all are legitimate but takes scholars to task for not carefully specifying what meaning they have in mind in a given context.  Confusion is too often the result.  I have taken Wilber a step further, arguing in this essay that, when talking about religion in general, it would be ideal to use a  definition that captures the universal essence of all religious expressions and that just such a definition is available.

Religion is a means toward ultimate transformation takes religion seriously in its own terms and locates the center of its expression where it fundamentally resides: in the mind and heart of the individual living a religious life.  There can be little doubt that everyone has ultimate concerns. Life imposes them on us and virtually forces us to deal with them, to seek some way or ways to alleviate the uncertainty and anxieties that attend our awareness of them.  With a definition that captures ultimate concern as our universal point of departure, we are positioned to distinguish the various types of religious commitment, not on the basis of their behavioral, cultural, or institutional expression - important to be sure, but secondary to the concerns of the individual - but focused laser-like on each person’s conception of an ultimate transformation and how it might be achieved.
The UTT definition provides us with a powerful tool for separating the essential elements of a religion from its culturally determined surface features.  Ancient Stoicism, for example, names Zeus as the creator of the world, but, unlike The Lord in Judaism, Zeus does not demand worship as a condition of salvation.  Stoics aim at an ultimate transformation in this life through the cultivation of reason and virtue.  Thus our definition enables us to see beneath the surface similarity of theistic belief to the deeper difference of the means of transformation offered in the two religious traditions.  Integral Theory deepens our understanding by revealing the vertical, developmental relationship between the two.  Whereas orthodox Judaism is ethnocentrically rooted in mythological faith and ritual practice, stoicism is grounded in worldcentric principles of reality and morals discoverable by reason.

Finally, incorporating the UTT definition into Integral Theory provides the basis for a much-needed postmodern understanding of all religious phenomena as legitimate in their own right as enactments of various stages of development through which all humans must pass.  UT scholars have illustrated with their “Eight Ways of Being Religious” that broad critiques of religious belief systems are superficial, missing the deep interest of believers in personal transformation. As I have argued, their system needs updating with a distinction between states and stages of consciousness and recognition of a hierarchy of religious stages in human evolution.  Those features are fully developed in contemporary Integral Theory, which provides us with the most comprehensive framework available today for understanding the religions of the world.

In a nutshell, then, I have argued that religion is best thought of as a deep feature of the evolution of consciousness in which an individual at each of several stages of 'growing up' perceives life to be profoundly unsatisfactory in some ways and seeks a transformation of those ultimate concerns by means appropriate to one's stage of development.  From instinctual to magical to mythic to rational and higher, the unfolding of our lives reveals ever greater challenges and suggests a path toward meeting them.  "Put more vividly, the claim [of religion] is that one is threatened by illusion but that he can move toward truth; by death but that he can move toward life; by chaos, but that he can move toward meaning; by self-destruction but that he can move toward an abundant life."  (F. Streng, Ways of Being Religious)
________________
For more on Integral Theory, see Ken Wilber, A Theory of Everything (2000) and The Religion  of Tomorrow (2017).  For a detailed integral study of the world's religious traditions, see Dustin Diperna, Evolution’s Ally (2016).  Ways of Being Religious, by Frederick Streng, et al. is unfortunately out of print.