On Subjectivism:
My Opinion Is As Good As Your Truth

"There is nothing so ridiculous that has not at some time been said by some philosopher."              - Oliver Goldsmith
At our November 8th meeting where we discussed "Post-truth," the OED's 2016 "Word of the Year," we were instructed by some of our friends that truth doesn't exist.  More precisely, the claim was that objective truth does not exist. What we call 'truth' is really just subjective opinion, or "truth as seen by you." "There are no facts; only interpretations."  What you believe is true for you, and what I believe is true for me. Everyone is entitled to their opinion, and one opinion is as good as another.  What people call news is just "fake news," if I don't like it. Everyone is biased.  There is no way to decide who is telling the truth about anything.  For every fact, there is an "alternative fact."  That's just how it is.  Hillary Clinton won the popular vote? - that's just your opinion.  Maybe so, maybe not.  Trump claims he won it, and who are we to say he is wrong?  The earth is flat?  If you say so; why not?
This sophomoric point of view is called epistemological or cognitive subjectivism (close cousin to epistemological relativism).  It's a 'theory' that has gained a strong following in the last 50 years or so in western culture, thanks to postmodern philosophy and social media, producing as their final triumph the election of Donald J. Trump as the President of the United States.  Thanks to the arch-subjectivist Trump, we are now officially living in a "post-truth" age.  Radical postmodern epistemology is moribund now in the halls of academia, but its popular version lives on in the thinking of millions of our fellow citizens, especially in social media where mere opinion seems to be all that matters.  Try to argue for something you think is true in 140 characters.


Opinion:  a belief or judgment about something, not necessarily based on fact.
There is, of course,  a subjective aspect to any thought we may entertain, because thinking is is carried out by conscious persons or subjects.  If I think sharks are endangered worldwide, that opinion subjective because it's mine.  I'm the one who believes it.  Every opinion takes place first in somebody's mental world.  That's the realm of subjectivity: our thoughts, imaginings, feelings, dreams, sensations.  In that respect, subjectivists are right to claim that all beliefs or statements about the world are subjective opinions.  Thing is, some of them are also true.  Sharks are endangered worldwide and I can produce the facts to support my opinion.  It's not a mere opinion Opinions that are true have an objective aspect as well as a subjective.  Of course, if I do not know the facts about sharks, in that case I can offer only a subjective opinion.
Now subjectivists may not roll over before this commonsensical objection.  They may claim that the so-called 'facts' are also nothing more than opinions, so we will need to come up with a stronger, more philosophical critique.
Our search will not be in vain.  Subjectivism and other radical relativisms collapse under careful scrutiny.  First up is a practical problem,  We can be quite confident that subjectivists do not act on their own theory in the real world.  When checking out at the grocery counter, they don't want to hear from the clerk that in her opinion the amount owed is x number of dollars.  They will insist on the actual total, demanding a digital recalculation, if necessary.  If diagnosed with a serious illness, they will seek a second opinion in an attempt to get a better handle on the truth about their condition.
Secondly, subjectivism is pseudo-philosophy, passing itself off as the real thing.  Philosophy has always been understood as the love or pursuit of wisdom but is more precisely defined as reflective "inquiry into knowledge, truth, reality, reason, meaning, and value" (A.C. Grayling, Ideas That Matter).  Since there can be no wisdom and no rational inquiry without truth, subjectivism is not really a philosophical theory at all, but rather a kind of anti-philosophy, a negation of the philosophical project altogether and, by the way, of science as well.
However, the main philosophical problem with subjectivism is that it is self-defeating.  The subjectivist wants us to believe that there is no truth, only opinion, but he does not offer his view as a mere opinion.  No indeed.  He wants us to accept it as a truth, an objectively true generalization about all knowledge claims made by anyone anywhere.  Subjectivism, he insists, is the one true or correct way to think about beliefs.  But his theory says there is no truth, no true beliefs about the world, only opinions.  This is incoherent.  The subjectivist is caught in a performative contradiction, a trap of his own making.  If he believes his theory, he can't teach it, and if he teaches it, he can't believe it.
That is why during the discussion we heard no argument in support of subjectivism, only a loud insistence that "There is no objective truth; only subjective opinions!"  There can be no supporting argument, of course, for that would require reasons leading logically to the subjectivist's conclusion, reasons which would have to be true in order to be supportive of the theory.  Moreover, all logical reasoning presupposes certain a priori truths, such as the rule 'Modus Ponens': If a statement P implies Q, and P is true, then it follows necessarily that Q is true.* But the theory says there is no truth, so there can be no logic, no true reasons, and the whole project collapses into nonsense.
It may often be a difficult needle to find in the global haystack of opinions, but … 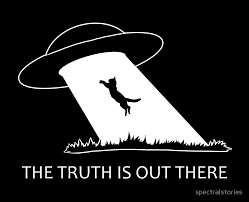 from X-FILES (of course)

Postmodern subjectivism/relativism seems to be fading from the academic world these days (See, e.g.,The Passing of Postmodernism here), so most discussions of relativism these days are focused on moral relativism.  For my treatment of that topic, see the next post on this site.